If you ever had the question “How to know if my charger and mobile phone have quick charge?”, we will help you to find it out easily.

We know that, on these accelerated times that we are currently living in our world, we are forced to do everything faster, and we also want the charge speed of our mobile phone to be faster. Also, the time that the charge of our batteries lasts still leaves a lot to be desired.

Imagine that you are out of your house or your office, that your mobile phone’s battery is too low, and that you are expecting a very important call.

Maybe you need to send an email where a very important negotiation decision depends on it, or you need to know about how the sales of your business are going.

For this, you need to be in contact with your work team, so that you are able to make decisions at the right time.

And, if you are a parent, you can’t take the risk of running out of your phone’s battery. You need to be aware of the time when your children come home. That is a job that doesn’t have a fixed schedule.

These are some of the examples of situations where you could run out of your phone’s battery.

Therefore, you need to urgently charge your mobile phone, and the best solution is to make a quick charge.

Additionally, this is yet another aspect to consider on the list of features to be considered before you buy a smartphone nowadays.

But, what is quick charge, and how to know if my charger and my mobile phone have it?

This is something that you should know before you end up in a similar situation so that you take care of your mobile phone’s battery and avoid being unable to communicate.

Below, you’ll find everything you’ll need to know if your mobile phone has quick charge, and which is the appropriate charger to take care of your battery and make the battery’s life last longer.

What is quick charge?

Even though the term quick charge seems to have a quite obvious definition, it is important to understand the technical term, and what makes it possible for modern mobile phones to have this functionality.

This is a technology that charges our mobile phones in less time than traditional chargers do, and it’s not something that relies only on the charger used, which needs to meet some technical specifications from the phone’s manufacturer.

Quick charge also depends on the fact that the phone must be compatible with the charger, because, otherwise, the quick charge won’t reach the battery. Also, you run the risk of breaking down the battery from using it inappropriately.

What are the units of measure of the chargers and batteries?

To measure the current or electron flow, two concepts are used: volts and amps. Volts refer to electric potential, and amps refer to the quantity of electrons provided.

There are many types of quick chargers. The most commonly known quick charger is the one that provides more voltage and amps than a conventional charger.

A standard charger provides 5 volts and 2.1 amps, while a quick charge one can send between 9 and 12 volts, and the amp measure could reach up to three.

Some manufacturers offer a 100% charge in 20 minutes, which is incredible when compared to the time that it takes a normal charger, which, on average, could take up to one hour to fully charge a battery.

The batteries are made out of two chemical compounds that, when combined, generate the electricity needed to make the phone work.

When the battery is connected to the electrical current, a reverse procedure is generated that allows the battery to store energy to be used later.

What a quick charger does is to provide energy with more power than a standard charger to reduce the time that the process takes.

For obvious reasons, this means that the unit of measure of the quick charger is higher than that of a common charger.

How to know if my charger and my mobile phone have quick charge?

Even though most quick chargers have a unique logo that shows compatibility with this type of charge, it is well known that, as it tends to happen with technology, there are a wide variety of imitation devices.

In other words, don’t be fooled, and don’t rely on just one source to check whether a device has quick charge.

This information is found on the bottom part of the charger, or on the battery’s label. It is also found on the phone’s manual.

But let’s be honest, it’s unlikely that you’ll have the manual on hand since most of us assume that we know how to use a smartphone, and that we don’t need to have the manual with us wherever we go.

But don’t worry. If the information is impossible to read on the charger’s label, or if you don’t have the manual on hand, you can look it up on the internet by typing the brand and the model.

Once you find the official source of the information, you need to verify the voltage and amperage. By law, this information should be visible on the charger.

The charge numbers on standard devices are of 5 volts and one or 1.5 amps. If you notice any higher numbers, this means that your charger and your mobile phone have the quick charge technology.

If, for instance, the specifications state that the device has 9V and 2A, it is highly likely that your device has quick charge.

As for how to check whether your mobile phone is compatible with quick charge, access the Android’s settings section, then, select “About – Battery,” to check the battery’s specifications.

It is also possible to find this information on the back side of the mobile phone or on the manual, depending on the brand and the model of the phone.

It is possible that you find modern chargers that automatically scan the mobile phone’s configuration to adjust the charge to the correct values. This way, they protect your phone.

We once again insist that you shouldn’t trust in cheap chargers that supposedly have quick charge, which end up not having the capacity of detecting the mobile phone’s configuration to provide the correct amount of charge, and could end up damaging the battery.

On the following sections we will explain to you the different types of quick chargers that you can find on the market, as well as their features.

What are the types of quick chargers?

With the need of being able to quickly charge the batteries of mobile phones, many alternatives from different manufacturers have appeared, which offer a solution in the least amount of time possible.

Even though there are general standards on the market, manufacturers tend to make alliances with phone brands to make their technologies compatible with their phones.

Some phone brands have opted for creating their own quick charge technology due to issues regarding exclusivity and marketing positioning.

Some of the most famous quick chargers on the market are those from Qualcomm, Samsung, Huawei, Apple, OPPO, OnePlus, and MediaTek.

As we have previously mentioned, each one have their own proposal and technology to solve the need for quick charge.

Below, we will see in detail what the different manufacturers offer, and the differences among quick chargers according to the brand and the time required for a complete charge.

We will compare the information from each manufacturer about the required time for a full charge, and we’ll show the result from the highest amount of time to the lowest in a graph.

Note that this comparison is for the full charge. But still, there are a lot of brands that offer chargers that are fast enough to be able to charge a phone during the first 15 or 20 minutes.

This is enough time for your mobile phone to be able to work for many hours, so that you’ll be able to do all of your activities until the next full charge.

MediaTek is the most used technology in mid-range phones and low-range phones. It offers a 70% charge in just 20 minutes, which is a big difference compared to conventional chargers. 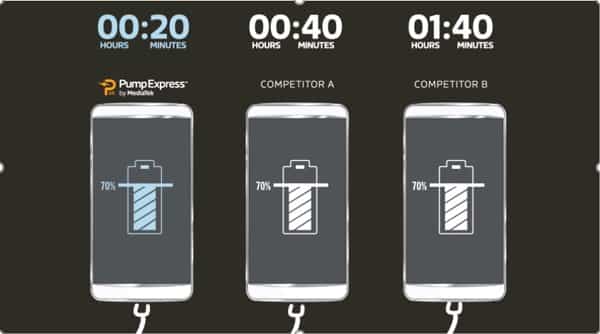 The system works under the Quick Charge protocols from Qualcomm. And, to fully charge a battery, a period of time of 144 minutes is required.

The iPhone has a quick charge system under the USB Power Delivery standard, which requires the following specifications:

Samsung provides its own fast charger, which uses the technology known as Qualcomm Quick Charge 2.

Among the quick chargers, this one is considered mid-range. It’s not the fastest, but it’s not the slowest either.

This is probably the most known brand on the market. It is currently on version 4+.

It promises to make a charge to make a battery last for five hours in just five minutes, and the battery’s heat during charging is 5 degrees Celsius less than with conventional chargers. 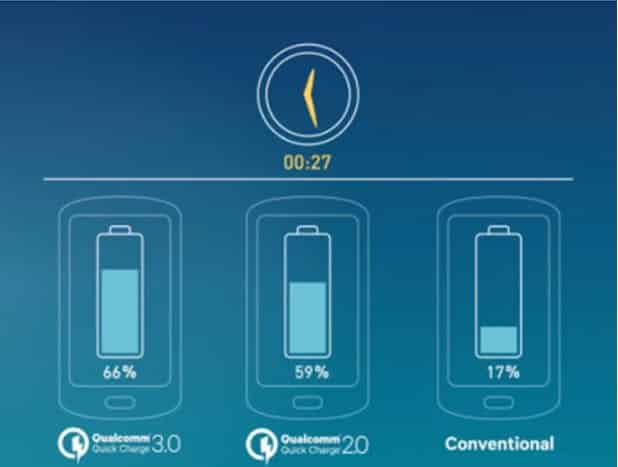 According to the technical specifications from this manufacturer, version 2.0 provides in 23 minutes a 59% charge, while version 3.0 provides a 66% charge. In comparison, a traditional charger provides a 17% charge in the same period of time.

The system is designed to decrease the charging speed after reaching 70% of the charge, so, to reach a full charge, the total amount of time needed is of 100 minutes.

You can download here the list of quick charge devices compatible with Quick Charge 4+ in PDF: https://www.qualcomm.com/media/documents/files/quick-charge-device-list.pdf .

This manufacturer had to change the name of their quick charger from Dash Charge to Warp Charge due to a trademark lawsuit in Europe.

With its new name, the manufacturer promises a full charge in 80 minutes. And, it is expected that the charging times become even lower soon with the arrival in the market of the OnePlus 6T, and the new energy configuration for Android 9 Pie.

The Super Charge charger from Huawei is one of the fastest chargers. It can make a battery get fully charged in 73 minutes.

The biggest innovation lies on the reverse charge system that is incorporated on the Huawei Mate 20 Pro, which can be used to charge other smartphones.

Meanwhile, Huawei’s technology requires 5 volts and 4.5 Amperes, and it is also compatible with Qualcomm Quick Charge.

This charger’s technology is different. Instead of increasing the voltage, it increases the amperage.

It offers a charging speed capable of recharging 100% of the battery in just 15 minutes. This is possible thanks to the low tension charging waves system of 5 volts.

Up until now, it is the most impressive charging speed offered by a manufacturer.

Quick charging is bad for the battery: myth or fact?

It is a fact for common devices that aren’t designed to be able to handle quick charging.

And it is a myth for more modern devices that have a configuration designed to be able to allow this functionality. Also, manufacturers generally deactivate quick charging when the battery reaches 30% or 40% of the charge to protect the battery.

And this makes sense. Thirty percent of the charge is more than enough battery to avoid being unable to communicate for many hours. Meanwhile, you make the rest of the charge in normal mode.

We hope that this information becomes useful to you. Now, just follow these simple tips to take care of the battery’s life while you recharge your mobile phone:

And, lastly, we invite you to share this information so that more people can find an answer to the same question that you had, and that we expect to have solved thoroughly: how to know if my charger and my mobile phone have quick charge?